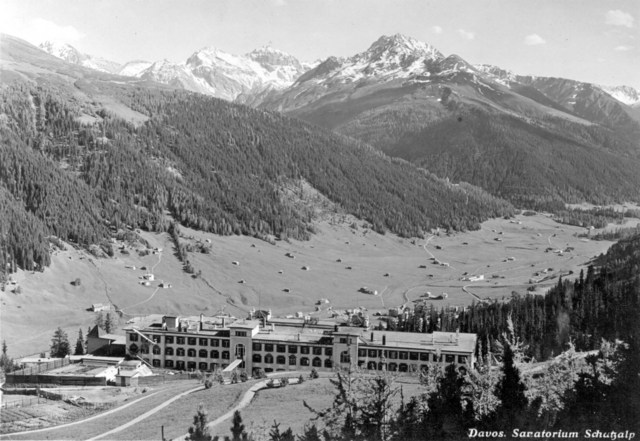 The myth of sanatoriums has been immortalised by the famous novel by Thomas Mann, who turned them into a metaphor of Europe idly precipitating towards World War I: a world apart on Switzerland’s sunny mountain tops, in the elegant art deco buildings, where time seems not to exist; a world where extremely peculiar relationships develop, scanned by the alternation of sun baths on the terrace, short strolls and frequent meals in the sumptuous dining parlours; a world of jolly desperation, inhabited by young people, where one can die after having loved for a whole night, and where the echoes of the rest of the world are muffled, almost unreal… Even the illness cured there benefits of a very special statute: «the whole illness is nothing but love transformed», wrote Mann, adhering to a long tradition which sees in tuberculosis an affection «of the spirit», which underscores the desire and dignifies the sick person…

Although reality fails cling to this literary image, there are, however, a number of elements which, for many sick people from the western upper classes, made this passage towards death or recovery a path much close to unreality, if not to a sort of dream altogether.
Since consumption sore raged just about everywhere, not only in Europe, sanatoriums started opening from the last years of the XIX century in places where the air was pure and sun beamed, offering a picture of treatment - a cross of high society entertainment and rest, intellectual friendships and pleasures of the table, «avant-garde» therapies and discrete luxury. The sanatoriums in Davos were among the most popular ones; this is where Thomas Mann started writing his novel; this is where Robert Louis Stevenson and Arthur Conan Doyle retreat; this is where Paul Eluard and Gala first met... Nothing was less sure than recovery; but these institutions endeavoured to make the patients forget the therapy’s uncertain nature and its prolonged times through the enchanting quality of treatment and the sublime portrait suspended out of time.

Nevertheless, during more than a half a century’s activity (which roughly corresponds to the first half of the last century, namely until the spreading of penicillin in the 50s), the «magic mountain» of people affected by consumption isn’t sheltered from the telluric movements shaking the scene of the Great History of those days.
From the Belle Époque to the Great War’s precipice, from the cumbersome national socialist neighbours seizing power, to the difficult balance among the great potencies during World War II, all the international problems seen from the view point of a small country like Switzerland, in the middle of Europe and therefore obstinately defending its neutrality, find their reflection in the Alpine high valleys, whose image of these tensions is, however, far from foregone.

As if history was but an extension of Thomas Mann’s pages, in it we find all the characters acting on the massive world scene (Luftwaffe officers among the highest-ranking officers in the American army; concentration camp survivors and chiefs of Gestapo…) reunited and mingling according to unlikely, or better, unreal, coexistence formulas. Sickness imposes its rules, no doubt; but for a part of these personages, the forces in action are not those implied in the normal weakness of a precarious health state.

Deeply exploring this “backstage” of the European history does not to appear without interest, at a very time when the last sanatoriums are closed one by one, and the memories of these places drenched with myth are fading little by little.

In order to evoke the particular atmosphere found in the sanatoriums, I have decided to shoot this film in the mountain town of Davos, located in the Swiss canton of Graubünden. This location is known for its “pure air”, the beauty of its landscape and several luxury health resorts. Thomas Mann’s novel “The Magic Mountain” is set in Davos.

Following on-location exploration, and after mulling over much of the abundant documentation available, it was clear to me that some of the Davos sanatoriums have played an equivocal role recent history, despite Switzerland’s declared neutrality.

The Magic Mountain describes a world where time stands still; one in which days and seasons meld so that they can no longer be distinguished; blanketed by snowfall, which nullifies shapes and forms; where the dead are carted away by night; and the ringing in of the new year is gaily celebrated by crowds of party-goers.

To highlight this break, the first part of the film focuses on the sanatoriums’ golden age, where time had seemingly stood still, marked only by costume parties, mealtimes and daily walks; while the second part of the film ponders the sudden explosion of history-making events onto the scene.
Indeed, not long thereafter, Davos would become a truly unique location, where Nazi officers (guests at the sanatoriums, under the direct control of the Third Reich) crossed paths with victims of Nazi brutality. Toward the end of WWII, following a forced landing, American Air Force prisoners at Davos couldn’t wait to taunt the enemy – young officers of the German Luftwaffe on leave, strutting proudly through downtown Davos.

And the connections between such characters, such events?
To do this, I have sought to incorporate and fictionalize my own personal experience. My curiosity for sanatoriums stems from the fact that my father, who suffered from tuberculosis, spent many years in sanatoriums. There’s just a brief mention of this in the film, but it was this that sparked my interest in a part of the history of sanatoriums, which I had completely ignored. I began with a few  images, a handful of ideas – and from there, a whole world opened up before me.

The structure of the film is thus based on a trip to Davos. The narrator’s voice-off guides viewers along the way, highlighting details – blithe, funny, sad, and at times even outlandish – of daily life inside the sanatoriums. Then come reflections on the evolution and history of the sanatoriums, with a special focus on the difficult period that encompassed the two World Wars.

The voice-off is mainly narrative, but it also interacts with characters, who may answer the narrator’s questions.  Such encounters over the course of the film are testimony to the narrator’s desire to learn more about certain precise issues. The narrator thus introduces interviews with characters, including:
- Benjamin Miller, a descendent of the family that first transformed Davos into a sanatorium-city; great grandson of Spengler and Turban, he is strongly attached to the world of the health resorts, and is a passionate collector of memorabilia pertaining to it.
- Marc Perrenoud, one of today’s leading Swiss historians, he worked on the widely known report by the commission on “Switzerland and Nazi Refugees (1995)”, and is well acquainted with the economic mechanisms that allowed the sanatoriums to flourish during WWII.
- Urs Gredig, journalist and historian originally from Davos, he is well versed in the sanatorium-city’s history, especially the period 1939-1945.
- Christian Virchow, German physician and former director of a sanatorium, he came to Davos in the 1950s, when tuberculosis was already on the decline. He knew Thomas and Katia Mann very well, and, as a lover of great literature, wrote many articles on them.
- Vincent Barras, a brilliant young medical historian at the University of Lausanne, he spent his childhood in a sanatorium where his father was director.

The soundtrack will be very elaborate: the whistling of the train, the creaking funicular, the hoist’s heavy doors squeaking, piano sounds, frenzy fox-trot, jazz played on old gramophones, pounding sounds, clearing the throat sounds, Swiss songs about the good Alpine air …
The finding of an extraordinary photographic archive at the time of the repérage in Switzerland last summer, picturing the life of a sanatorium at the beginning of the XX century - in particular with pictures of people in period clothes sitting at the table, reading, resting, whilst having their lungs listened to, giving concerts, dressing up for sumptuous parties – will permit to evocate with on-the-spot projections that same cross atmosphere between dream and reality described in The Magic Mountain.