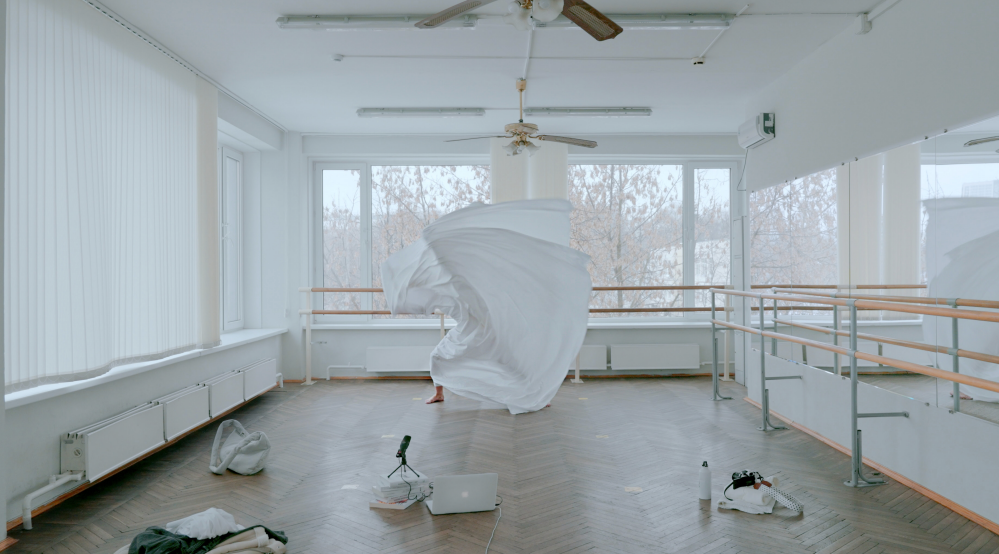 On 28th February 2022, Bianca celebrates her 22nd birthday in a small apartment in a Brutalist neighbourhood on the outskirts of Moscow, where she lives with her mother. For the digital world, Bianca is Electa, an alter ego inspired by the protagonist of Igor Stravinsky’s The Rite of Spring. Electa is known on social networks thanks to her moving dance performances and her obsession with the colour white. Bianca was born in Norilsk in Siberia, one of the world’s most polluted cities and is part of an international group of youngsters that revolves around Radio Esperanza Libre, a podcast channel founded by Anita Lopez, a young environmental speaker living in Río Gallegos in Argentina. Radio Esperanza Libre is inspired by a radio that has been shut down and once broadcast from Esperanza Base in Argentine Antarctica.

Anita and Electa met by chance through the Internet because, in addition to sharing an interest in environmental issues, they have a curious date of birth: 29th February.

In real life, Bianca is deeply insecure. She is not used to contact with others and also struggles to verbally interact with her mother. Bianca is locked in the masterpiece of Electa’s exhibitionist cage with Electa’s network of virtual connections becoming Bianca’s only possible route of escape. This is at a time when, unfortunately, climate change is not the only immediate urgency quashing her will to live and joy of expressing himself. The podcast on Monday 28th February 2022 is an opportunity for Electa to cry out for help. Sometimes it is possible to build a concrete path of hope even through fleeting connections that only seem far-flung.

In March 2022 our plan was to leave for Russia to conclude the research we had been doing for over a year regarding the development of White Days, the feature film we are currently writing. We were to meet Lika, Masha and Yana, and together start exploring and imagining a film able to tell the story of generation Z. This would be done through a small group of twenty-year-olds, who decide to leave their homes in different parts of the world to go on a journey together. They meet in person for the first time to recount the planet’s chilling cry at the end of the world.

We were unable to leave in March; and the cry that left us helpless was that of our travel companions in Russia, marooned overnight without hope and dreams. We decided to carry on despite everything, despite the restrictions, the VPNs, the war. We harnessed the Internet for what we think is its most amazing facet: crossing borders together while remaining far apart.

Happy Birthday was born: a short film, which embarks on a journey of investigation into a generation born in the year 2000. The journey begins on 28th February 2022, four days after the saddest and most bitter day that this year will leave in its trail. An entire generation is awakening, as if in a nightmare, into a world that is falling apart around them: the first generation to find itself dealing with an almost insoluble legacy at a very young age. This film begins to focus on these young adults, united in their connections and emergencies, able to perceive the planet as a single pulsating being. Z is a generation that, through social networks, describes itself as fluid, creative, self-destructive and potentially explosive; from birth it is a hyper-connected and oppressed generation preparing to manage an unpredictable, decadent, but also wonderful and amazing world. These youngsters, children of the climate emergency, consumerism, populism, the health crisis and war, will have the opportunity to tear down the walls surrounding individual certainty. They will learn not to tether their thoughts and adapt to change without fearing the anguish of uncertainty, using their talent to seize the opportunity of connections created in chaos. This generation will have to make difficult, traumatic choices and enormous sacrifices, but it will have the possibility to stage a real revolution by dissolving the illusions of previous generations; it will be able to do precisely what my generation did not want to do: have a collective conscience.