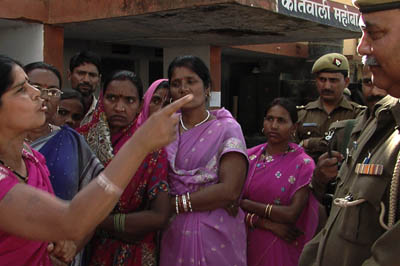 The documentary tells the history of the “Gulabi Gang”, where gulabi is for pink, with special attention to Sampat Pal Devi and Aarti Devi.
The Pink Gang was founded in 1990, but his leader Sampat Devi gave it a name only in 2006.
The gang is based in one of India’s poorest regions, which lies to the south of Dehli, in the Banda district, on the borders with Uttar and Madhya Pradesh.
The peculiarity of the gang is that all of its members are women. They all wear pink saris and are armed with a  lathi, a special stick with an ancient and contradictory origin.
At the beginning the actions did not seem to be made by a gang. They would rather look like isolated and inefficient protests made by some isolated individuals. The oral tradition, which is a basic element of the Indian history and culture, helped in bringing this events to the light, so that more and more women joined the gang of Sampat Devi. Sampat Devi is fifty, she has got a slim face and green eyes, and  some members of the local community compare her to the legendary Queen of Jhansi, Laxmibai.
The gang counts more than 400 women, and many of them are married. Their husbands agree with their decision to join the gang. The living condition in that region is often unbearable for the women, especially for those who belong to the “wrong” caste.
The Pink Gang defends the villages from every abuse, especially against criminals. In this area and in many other areas in India, people are often victim of violent bandits, who steal the few belongings of the people and sometimes abuse the women.
Until the birth of the gang the crimes suffered by the women were not even recorded after they had been declared to the police. No matter who committed the violence (a husband, a brother or a criminal) every official control  would give the same result: no crimes against women.
One of the most important and of the most efficient actions of the Gulabi Gang was the assault of a police office in order to force the policemen to record the violence suffered by the women. The policemen, who are often corrupted, were beaten up and threatened and finally forced to keep a record of the crimes committed on women. The same happened to the large landowners and the entrepreneurs under suspicion of exploitation of the workers, and to the corrupted or violent officials.
Aarti Devi is 22 years old, she has studied and took part to that action.
That one was one of her first actions. Even if she is very young she is very self-confident. She knows that her education is very important for the gang’s future. Sampat Devi knows it too.
Aarti is very interested in running the women’s fabric center that the Gulabi Gang is trying to raise funds for, and she plans to run a rehabilitation centre for alcoholics as well.
Violence is not the best way to see the acknowledgement of a right, but it is often the only possible way.
This is a meaningful example of the Indian situation. The traditional non-violence land is changing its way to consider life. The new generation thinks that rebellion can be the sole solution for a decent life.
In a certain way Aarti represents the future of this gang: she has the opportunity to turn into a reference point not only for the people living in the Banda district and in the surrounding area, but also for many young Indians who do not agree with the new model of development.
Following and interviewing those women, listening to their speeches, looking at their exercises with the lathi, showing the seat of the group (where Sampat Devi lives) and the places they live we will show the strength and the love for justice of those women, who are fighting with a stick for basic rights which should be acknowledged to everyone.

NOTE OF INTENTION OF THE DIRECTOR

The documentary will be made with a high-definition camera which can mount cinema’s lens.
The quality of the images, of the colours and of the framing will be the main starting point for this documentary: places, faces, pink saris, villages and houses will be integral part of the story and must therefore be shot with great care.
Even when the situation will get very excited I will try to get the best possible framing trying at the same time to work as quickly as necessary.
Being accepted during the most dangerous and compromising circumstances will be very important.
The best way to capture the women’s spontaneity is spending some time with them.
I have made another documentary in India about the typical day of 3 women belonging to different religions: a Muslim in Dehli, a Hindu in Varanasi and a Tibetan nun in Dharamsala. I observed that the enthusiasm or the fear for the camera of the early days little by little turn into indifference or empathy.
To produce a good soundtrack I will need a sound technician with an independent equipment for the recording. This is very important because it allows the camera and the sound technician to move separately.
Since not all of the members of the pink gang can speak English a will need the help of an Indian person. Shaid Sab will be our guide and translator, like he did in the past for some other productions.
My aim is that of letting images speak for themselves as much as possible, allowing the characters to speak in a very natural way, without forcing the conversation. They have a strong desire to let their cause be known outside their habitat. Therefore, they might speak directly to the camera, looking for a person to talk to, or maybe for somebody who just listens to them.