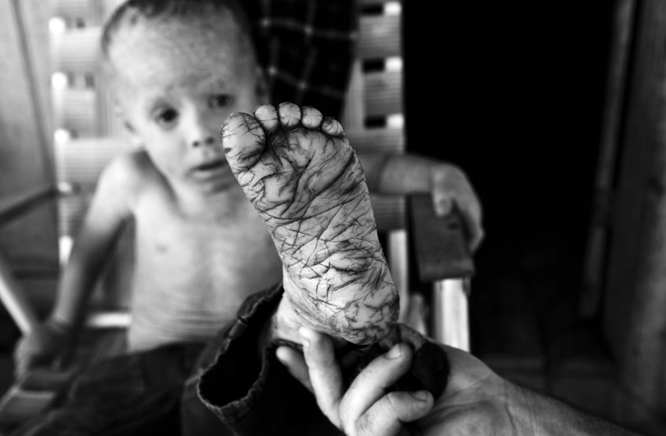 If someone today dared to defend DDT or hide it in another pesticide preparation for agriculture, such actions would rightly pass for criminal. Nevertheless, from the 1940s to the
1960s, its impact on the environment went unchallenged. Although DDT was finally banned in the 1970s, another toxin had already taken its place: Agent Orange, which was used by the U.S. military to defoliate the Vietnamese jungles during the Vietnam War. Both DDT and Agent Orange – patented by Monsanto – are products highly toxic and have been used around the world leaving devastation in their paths. However, undeterred by bad publicity, by 1974 Monsanto began marketing another noxious agrochemical: Roundup. The most widely used herbicide in the world today, Roundup’s primary ingredient is Glyphosate. The widespread application of this damaging pesticide is a common thread that links the prior use of Agent Orange in Vietnam to today's Latin America. This thread binds together disturbing concepts like neurotoxicity, transgenic agent, DNA pathologies, and hormonal, immune, and reproductive system damage – to name just a few.

Why do Roundup, considered by many the DDT of our age, remain out of the public eye, largely living in the shadows? Protected by multinational interests, Roundup was never tested for a sufficiently long period of time to prove its safety. However, all that’s needed is to study the deleterious effects of Roundup in Argentina where it has been massively used in genetically engineered (GE) soybean production. Here, we can observe horrifyingly similar impacts on people to those seen in Vietnam from Agent Orange. The toxicity of Agent Orange has finally been proven. The battle to establish the toxicity of Glyphosate, however, is still ongoing. The discrepancy between the figures disseminated by the media and those presented by the network of independent doctors is, at the very least, disturbing. But if Roundup is not "particularly" dangerous – as the production giants want us to believe – why do the dreadful impacts on people subjected to this poison seem identical to those caused by Agent Orange? Our documentary will give voice to the victims of a phenomenon that – in a global economy – affects all of us. Its urgent cautionary message has been made even more necessary given the recent vote in Brussels clearing the use of this toxic product in Europe for another five years.